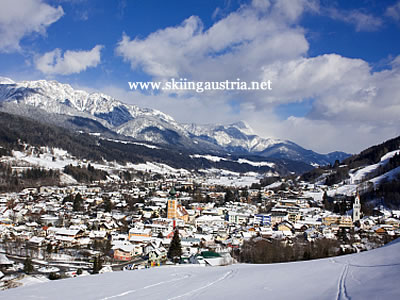 Schladming is a resort which remains surprisingly undervalued on the English-speaking ski market.

Perhaps that has something to do with the fact that the town has never needed to position itself to attract ski holidays packages designed around charter flights.

The excellent access by train and road (with a station in the town and not far from two of the main Austrian motorways) has meant that the skiing has long been favourite for locals and visitors arriving from neighbouring countries.

Schladming is one of the closest 'big' resorts to Austria's east so it attracts a lot of visitors from Vienna and the neighbours further to the east.

The skiing is split up onto four different mountains and intermediate skiers who like to cover a lot of distance will get the most out of the resort. There are also some smaller neighbouring areas in the same valley covered on the pass, while those with access to a car have the opportunity to sample some of the other more far-flung areas covered on it.

Schladming is very much a 'town resort', although not unattractive, and thus has a good variety of all kinds of accommodation (see the Hotels and Travel tabs above for details about booking your own accommodation and making your own way to the resort).

Location: Schladming is situated in the north of the Austria province of Styria near the Dachstein mountains.
Access: Schladming is one of the most accessible of Austrian resorts, with good links to motorways at both ends of the valley, while there is also a train station in the town. 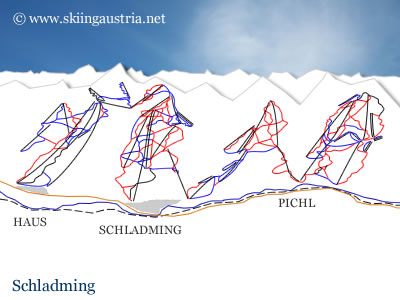 So for them, Schladming is famous for as a venue for some of the most exciting ski races that they have seen during the World Championships in 1982 and 2013, as well as for an annual night slalom World Cup race which draws thousands of visitors.

Strangely, it seems to have sunk below the radar of many English-speaking countries, despite a ski area which can easily hold its head up in company with the top resorts around the world.

The main problem that Schladming suffers from is the perception of its altitude. The town is low and the tallest mountain is the only one over 2000m in height. Having said that, the slopes are almost all north-facing and the snowmaking (as with any Austrian ski resort) is top-notch.

It is however another reason, along with the great access mentioned in the previous section, why Schladming has remained a favourite of those who can make a later decision on where they are heading for their winter break - in other words, car drivers from around Austria and nearby countries.

The skiing itself is split up onto four mountains which are all connected by lift and by ski bus services along the main valley road. The mountain famous for the ski race finish above the town is the Planai and the runs there are very typical of most of the area - a lot of wide open red runs cruising through the trees.

Off to the left and connected at the top of the mountain is the Hauser Kaibling. Haus is a smaller neighbour to Schladming and this mountain has a lot of the more attractive easier blue runs in the ski area.

On the other side of the Planai are the Hochwurzen and Reiteralm ski areas. Hochwurzen is linked to both the Planai and the Reiteralm by runs leading all the way down into the valley at around 750m. Pichl, the village at the bottom of the Reiteralm, is another option for people who are looking to stay outside the main town.

Local skiers might also want to try the Fageralm, which is connected to the Reiteralm by ski bus. Another local alternative are the gentle slopes of nearby Rauris or the spectacular views from the few runs up on the Dachstein glacier.

Anyone who wants to do any exploring in a car will take advantage of the Ski Amadé lift pass, which covers 25 different resorts in 5 different ski areas.

The total Schladming 'Four-Mountain' area has 45 lifts and covers about 125km of terrain.

A six-day pass will cost 266 Euros in the main season.

Cheaper price dates are available before the Christmas week, for much of January and from mid-March.

With 3500 guest beds in the town and more in the neighbouring villages, there is no shortage of choice when it comes to a place to stay for a skiing holiday.

The base of the Planai is naturally the most convenient for skiers and there are a lot of new or remodelled hotels in the area.

Prices drop further out towards the edge of the town on near the main road and the train station.

Pichl is a hamlet closer to the Salzburg motorway with its own connections into the four mountains, while Haus is another smaller option on the other side which might suit those arriving from Graz or Linz or other directions to the east.

Ramsau am Dachstein is another pretty little resort above the valley at the foot of the Dachstein mountains with its own small ski areas (and a good option for cross-country skiing).

The search box to the right (or below if you are using a smartphone) gives an availability check for particular dates for all of the accommodation in Schladming.

Visitors who want to restrict their availability search to one particular type of accommodation can use one of these links (open in a new window):

or for neighbouring villages of Ramsau, Haus and Pichl:

How To Get To Schladming

Schladming may be in the province of Styria but the most convenient airport, by a long way, is located to the north in Salzburg.

It's not only the closest of all the airport options but it possesses the widest range of flight options, whether charter or scheduled or low-cost, and good public transport and road links to the resort.

Linz, Graz and Klagenfurt are all possibilities, but the limited range of flights on offer from these less popular airports make it a roll of the dice whether a suitable destination is on offer and whether seats are available.

Munich has an excellent range of flights from all over the world, but is nearly three times the distance of Salzburg.

Connections from the airport are simplified by the fact that Schladming has a railway station in town and fairly good services to and from local capitals. There are also some bus and taxi companies who offer airport transfers from Salzburg airport.

Car hire is available from all airports - links to rental car availability in the different countries are listed below and open in a new window:

Road connections to Schladming are generally excellent - the town is only 25km from a major junction on the A10 Tauern motorway, so routes from Salzburg and Carinthia are pretty straightforward. Arrivals from anywhere further west or north should head for Salzburg and follow the motorway south. Those arriving fom Linz or points east or from Graz should take the A9Pyrhn motorway and approach Schladming from the other end of the Enns valley.

Village Altitude: 745m
The ski season opens for winter 2018/2019 towards the beginning of December and runs through to into April.