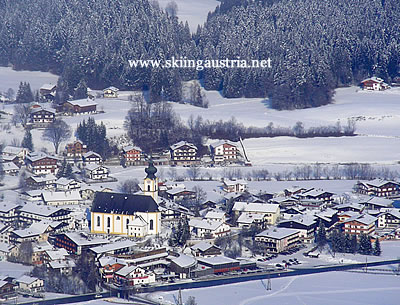 Söll long had a reputation as the cheap and cheerful winter equivalent of a Spanish beach resort.

That was never entirely true - but the resort retains all of the attractions for beginner skiers that laid the foundations for that misconception.

It's a relatively small Tyrolean village with comparatively cheap prices, good facilities for those who are on their first ski holiday and plenty of things to do outside the time on the slopes

For those who are able to ski already the SkiWelt area can be under-appreciated - despite its lack of altitude it is still one of the great linked-up areas in Austria - and the expansion of snowmaking facilities has removed a lot of the concerns about the relative height of the villages at the bottom of the slopes.

Söll has a good location near the base of the Wilder Kaiser mountain range yet not far from a motorway and three major winter airport destinations.

There is some luxury accommodation around in the village these days, but still the mix tends to be more guesthouse and family hotel as well as some apartment accommodation.

Other nearby resorts which offer access to the same area are Scheffau and Ellmau (see the Hotels and Travel tabs above for details about booking your own accommodation and making your own way to the resort).

Location: Söll is one of the resorts in the SkiWelt ski area, one of the largest in Austria, situated in the eastern part of the Tyrol.
Access: Söll is located close to the main Inn valley on the road between Wörgl and St Johann.

The ski slopes of Söll are reached either via a ski bus or the underpass on the main road by the beginner slopes opposite the village.

From there an efficient gondola transports skiers up to the Hochsöll area, with an undemanding beginners' area at the top of the gondola, a big open bowl above the top station of the gondola with a number of red runs and a couple of tough black options from the top of the Hohe Salve.

Those who are off to other resorts around the massive area will be using one of the number of ways out of the Hochsöll bowl. From the top of the leftmost chairlift looking up there is a way around the back of the Hohe Salve which leads over to the lifts up to the Brandstadl area near the top of Scheffau.

Off to the right is the access to the Rigi area, which links to the run all the way down to Itter - great in good snow conditions - or over to the mid-station above Hopfgarten.

The lift all the way to the top of the Hohe Salve gives access to all of the above options as well as the black bump runs under the gondola.

Scheffau, Ellmau and Going are the villages on the northern side of the area, in order of distance to or from Söll. Scheffau is well-known for its good snow conditions and for a couple of excellent ski routes down to the bottom station. Ellmau and Going both have selections of short intermediate runs and make a good day's ski excursion.

Itter is a small neighbour to Söll with another good long run down to the valley - this can be problematic in bad snow conditions but should be sampled if the snow is good enough. Around on the southern side of the area are Hopfgarten and Brixen, both resorts where the valley lifts have mid-stations and plenty of intermediate slopes around that level due to them being on the sunny side of the area.

The connection across the Brixen valley to Westendorf - now with a shiny modern gondola link up to the Choralpe - is at the bottom of the run down to Brixen. Westendorf is an interesting resort in its own right, with plenty of mainly intermediate-level skiing and is also now linked into the Kitzbühel area (although this is not available on the SkiWelt pass and is probably too far away to be of much interest for those staying in Söll).

Care should be taken with the ski map and with lift closures. The area is a large and complicated one and the best way back to where one started from is sometimes longer than imagined. Areas linked by lift such as Ellmau, Going and Westendorf demand a fair amount of time both to get to and return from.

In decent snow conditions it is possible to ski all the way back down to Söll and the bottom of the gondola. This run does have bottlenecks however and can get extremely crowded - many people prefer to use the gondola to return to the village altitude.

The total SkiWelt area has 91 lifts and covers more than 280km of terrain.

A day pass will cost 51 Euros in the main season.

A six-day pass will cost 249 Euros in the main season.

Ski pass prices are reduced during the period before the Christmas week and from mid-March until the end of the season.

Although Söll is a relatively small village, it does sprawl along the main road through from Wörgl to St Johann.

Much of the accommodation is located on the other side of the road from the ski lifts and slopes, clustered around the church.

There is a small scattering of hotels and guesthouses along the road up to the main Hochsöll gondola. And there is some accommodation that is a fair walk from the village centre up on the hills above the village.

Söll has a reputation for being a reasonably priced resort and most of the rooms and apartments are part of family-run hotels and guesthouses. Some of the package holiday companies also offer 'snow home' accommodation in small pensions, which may be further out from the centre of the village or in a nearby hamlet with access to the slopes by ski bus.

Carrying along the road from Söll in the direction of St Johann are the villages of Scheffau (usually with the best snow in the SkiWelt area) and Ellmau (with a reputation as a family-friendly village).

The search box to the right (or below if you are using a smartphone) gives an availability check for particular dates for all of the accommodation in Söll.

Visitors who want to restrict their availability search to one particular type of accommodation can use one of these links (open in a new window):

or for the villages of Scheffau and Ellmau further around towards St Johann:

How To Get To Söll

Söll is pretty central within the triangle of Innsbruck, Munich and Salzburg airports. Innsbruck and Salzburg will tend to be the choices if arriving on a charter flight or with a package holiday, while Munich is the best for scheduled flights and those arriving from further afield.

The village of Söll isn't wonderfully well-served by public transport. During the day time there are bus services which run along the valley floor and out to the railway stations at Wörgl and St Johann. But the distances are not so great for a local taxi from the train station to be a great financial burden and Wörgl is on the main railway line between Innsbruck and Munich (and Salzburg).

Car hire is available from all airports - links to rental car availability in the different countries are listed below and open in a new window:

Söll is easily reached from the west via the Inn valley motorway from Munich followed by the main road from Wörgl. Those arriving from the north or on the motorway through Germany from the east to Rosenheim and the Austrian border can either head for Wörgl or take the more adventurous back route direct from Kufstein to Söll.

Those arriving from the east also have the option of driving from Salzburg through the part of Germany that separates Salzburg from the Tyrol, which has the advantage of being more direct that the motorway route. This road has been improved over the last few years, but can still be busy in high season or slow in bad weather.